The journey began in a place that I’ve been to many times before.  A relatively standard holiday destination for a lot of Kiwis. Melbourne.

I take time out each year to attend the Formula 1 Grand Prix there, and hence I thought it a great place to start our year long journey.

Melbourne has an alluring vibe to it, always buzzing with something; some cool new restaurant to try or a different part of town to visit.

Most years, my visit to Melbourne doesn’t leave much time for sight-seeing as I’m busy watching the F1 cars drive around the Albert Park circuit. However, this time I allotted more time after the GP to really see things a bit better. We hit up the Queen Victoria markets (a Melbourne must-do, even if it’s just to watch the craziness), Hosier Lane, Southbank and out to St Kilda beach. Every New Zealander has thought about which Australian city they would move to if it came down to it- and mine would be Melbourne. I love the cafe/restaurant culture, the people are friendly and laid back, and simple things like rent seems relatively affordable and the public transport system is epic!

For anyone tripping to Melbourne, here are my top five things to do there:

Next stop on our trip was driving from Melbourne to Adelaide along the Great Ocean Road.  We hired a car in Melbourne and set off along the coast – the road starts off with long straight motorways (freeways) until you get to Geelong, and then starts to wind its way South West along what I guess is technically the Bass Strait, as far south as Great Otway National Park.  Turning North West is when you come across one of the most awe-inspiring sights I have ever seen… The Twelve Apostles:

These limestone stacks were formed by erosion, and despite being named The Twelve Apostles – there were only ever 9 independent stacks – this has now been reduced to 8 (see picture above, the pile of rubble there was the 9th stack until sometime around in 2005).  It is one of those things however, that even though the remaining stacks are eroding, it is likely that as the cliff face itself erodes also, more stacks will be made.

After driving the rest of the Great Ocean Road (and staying the night at the Cape Nelson Lighthouse Cottage!), we arrived into the Barossa Valley.  Unfortunatey, due to it being Good Friday – almost everything was closed!  Note to self: check public holidays for the country you are going to. 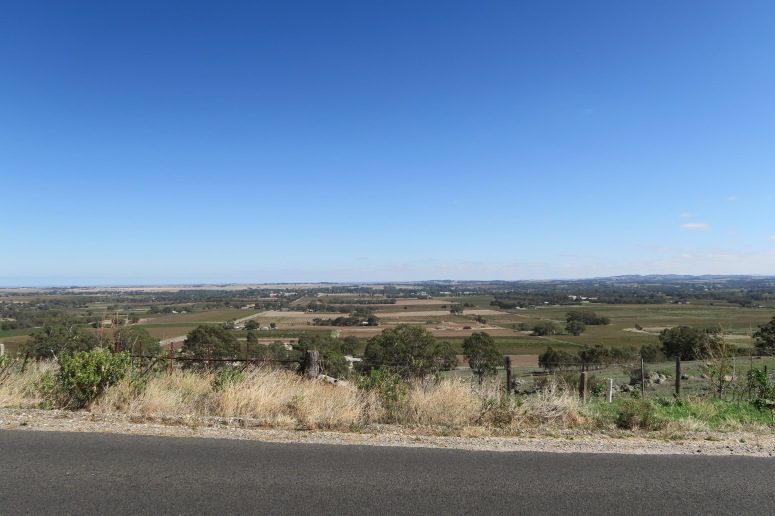 The next leg of the journey saw us swapping our rental car for the train.  The Ghan train departs Adelaide Parklands terminal weekly (on a Sunday) heading for Alice Springs and then onto Katherine and Darwin.  There are three different classes on the journey we were on: Platinum, Gold and Red – each one getting progressively more budget than the first.  Hence, we were the most budget of the budget with the Red Backpacker service!  Basically meaning that we had a reclining chair, and that was it for the 26 hour journey to Alice Springs.  To qualify for the Backpacker service, you should have a student/backpacker travel card, such as a YHA membership, ISIC card or similar.  We signed up for YHA cards as soon as we arrived in Australia, as it might come in handy at some other point – and it was only $AUD25 for the 12-month membership.  However, our memberships were not checked as we boarded the Ghan train anyway.  The ticket from Adelaide to Alice Springs was $AUD297.

Top tips for riding long journeys on a train:

The train arrived into Alice Springs at 2:30pm on the Monday (26 hours later, including a one-hour time change) – and it was 32 degrees (C).  We stayed one night in Alice (but again, it was Easter Monday so most things were closed!).  Luckily, the tourist office in the centre of the town was open, and we started talking to a very helpful lady there about our plans to drive to Ayers Rock (Uluru) in the morning and the surrounding waterholes, and sights later in the week.  She asked if we planned on going to something called the Field of Light.  I had no idea what she was talking about.  As it turns out, a famous installation artist named Bruce Munro had set up a field in front of Uluru with 50,000 solar powered, fibreoptic bulbs that literally formed a Field of Light.  Opening night was that Friday night, and it seemed like an opportunity we didn’t want to miss.

We shifted our plans on the spot, organised a booking for Field of Light for the Friday and reserved a camping spot at the Ayers Rock Campground.  This then meant we had three days in between to fill, and had already researched the places we wanted to go:

That Friday, we arrived to Yulara (the base for all things Ayers Rock) and attened the Feild of Lights: 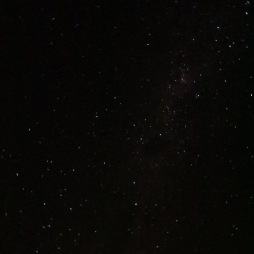 And then in the morning, we decided to climb Uluru.  Technically speaking, it is culutarlly insensitive to climb on the rock.  It was a tough choice whether or not to do it – as of course, we respect the cultures that we travel to, but in the end it was too much of an amazing experience to pass up. 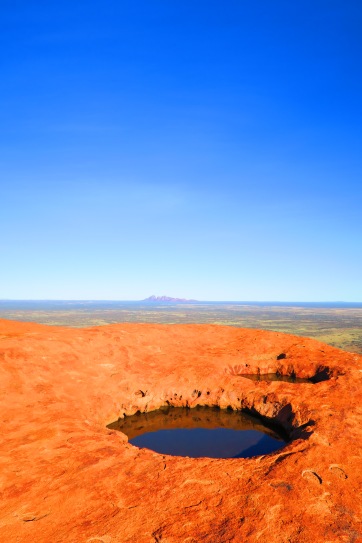 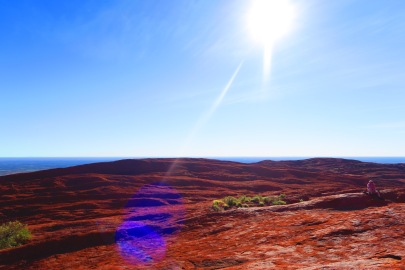 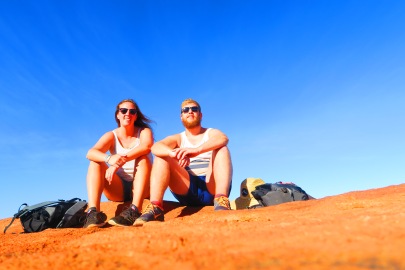 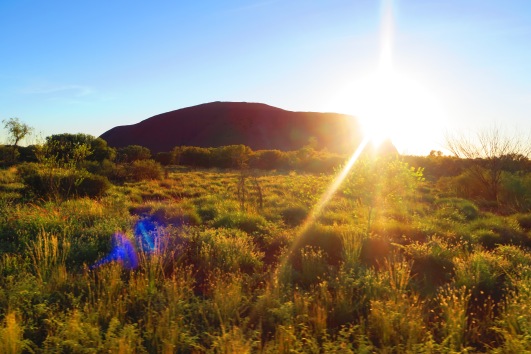 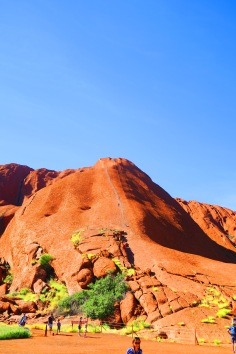 The first part of the climb is so steep you need a chain to help pull yourself up the side of the rock (see last picture above). The view from the top is incredible – you can literally see everything around you 360 degrees, and (other than the Olgas – Kata Tjuta), there is nothing.  Nothing for miles and miles.

The Ghan train rolls through Alice Springs again the following week on the Monday, and this is our transport to Darwin, our departure point from Australia.

It’s insane to think that all this travel was completed within 2 weeks – over 4,000 kilometres.

Next post will be the Gili Islands, Lombok, Indonesia!!