After a few days in Ubud, we decided we wanted to explore some places a little further afield – and, I’m not gonna lie, we just loved riding our scooters everywhere!  So the vague plan was to head north to the township of Singaraja (the island’s old capital) over the mountain ranges in the centre of the island, and then stay there for two nights and to return back to Ubud (where we had hired to scooters from).

We packed our small Kathmandu day packs for the two night journey, and set off through the rice paddy fields and shaded forest of the central island.  When the terrain started to climb slowly after about an hour, the temperature started to cool slightly (I’m talking down from 33 degrees celsius to 30!), and the clouds started to gather above.  Luckily, we had packed our rain coats into our backpacks, as shortly it was absolutely pouring down.  The traffic became manic around the Ulun Danu Beratan Temple area, full of tourist buses and private cars all inching along and tooting at each other trying to get to the temple that features on the Indonesian Rp. 50,000 note:

Once we had checked out the temple, it was back on the road.  Thankfully, it seems most of the traffic then heads back south after viewing the temple, as we were almost alone on the roads from then on (as alone as you can be in Indonesia!).  We wound our way up one hill ten minutes from Ulun Danu at the bottom of Mt Bratan, where the road was absolutely covered in monkeys.  Hundreds of them roaming around, crossing the road, playing, eating, everything.  These monkeys seemed relatively friendly as well – so in my opinion this is a better spot for monkey watching rather than the Monkey Forest in Ubud.

After reaching the top of the mountain, we started the windy descent towards Gitgit waterfall.  Because of the rain, and the traffic, we hadn’t left ourselves enough time to trek the 45-minute return trip, as it was pretty much dark by the time we got there anyway.

We had booked a stay at a beach front property at Lovina, about a 15-minute ride from Singaraja.  I’ll be honest, there’s not a lot to see in this area.  The best stuff is either up in the hills or off shore – so don’t expect much from Lovina nor Singaraja.  Lovina is famous for dolphin safaris, however we had heard some reviews from friends in Ubud (both locals and other travellers) that the boats tend to spend more time chasing what they thought was a dolphin rather than being inundated with with friendly sea mammals – hence, we skipped the dolphin safari (plus, we are from New Zealand, so you know, we’ve got that stuff at home!). 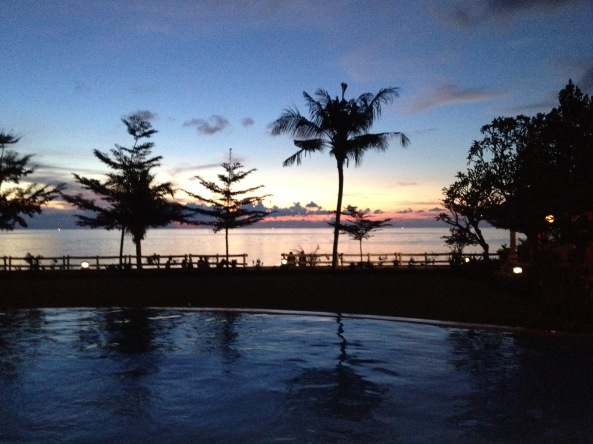 Instead, we spent the next morning up at the Air Panas Banjar hot springs.  These natural hot springs are one of the sacred spots for locals, dubbing them ‘Holy Hot Springs’.  We arrived nice and early in the morning (they open at 8am), as apparently they get busy after about 10am.  I’ve always found it better to arrive at these tourist spots early in the morning also, as you tend to catch the stall-holders off guard that early, and you are less likely to get hassled to purchase random items.

The hot springs are made up of three different pools, one flowing from the previous, all surrounded by beautiful forest and flowers.  The water is warm, but not as hot as I was expecting.  There are some stone dragons placed around which spit water into the pools, so you can find a spot underneath the flow there and get a free massage.

From the hot springs, we drove to Singsing waterfall.  It is well sign-posted to find, and just a short walk from where you park.  The carpark is by donation – but make sure you vehemently refuse the offer of a tour guide as it is unnecessary and they will over charge you for the service.  They will try to just tag along anyway, as what happened to us, and then demand money for their “guiding”.  The waterfall is easy to find yourself, follow the stream along, cross the river and follow up the left hand side.  The waterfall itself is lovely, not overly tall, but a great place for a swim.  Deep enough, and you can swim right under the falls.

We had such a great day doing these activities, that the idea of having to get on our scooters, and ride the 5 hours back to Ubud the following day didn’t sound appealing anymore!  So, we changed our minds!  That’s what I love about not planning too much in advance when backpacking, we were having a good time, so we changed all of our plans.  Instead of heading back to Ubud, we decided to travel west from Lovina, and circle the island pretty much.

So from Lovina, we scooted the hour or so journey to Pemuteran, and joined a snorkelling trip around the beautiful Menjangan Island.  This trip was run by Sea Rovers, which run their tours from the Adi Assri Resort & Spa.  We left the hotel on a speed boat at 8am, and went to the first snorkel spot.  The coral around here is stunning, and there are plenty of fishes to keep you busy – we even saw a massive octopus!  The tide floated us along to the next spot, after about 2.5 hours.  We climbed back on the boat then for a rest, and to re-apply the sunscreen!  It didn’t work though, I still ended up lobster!  We had lunch on the boat and returned to Adi Assri at about 2pm. 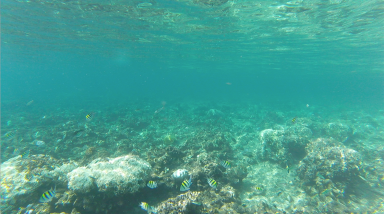 The next day we rode about an hour and a half from Pemuteran to Negara on the south-west coast of Bali.  Once you pass Gilimanuk, the road gets extremely busy, full of trucks taking things to and from the port.  Gilimanuk is the main shipping port where all items come from and are sent to Java.  We followed trucks full of chickens, gravel, water bottles, building material, you name it, it was being brought in from Java.

That night was spent at the most random bungalow I’ve ever stayed at, the hotel complex had over 25 rooms, and yet we were the only guests.  The restaurant served just us for dinner and breakfast, and we had the pool to ourselves all day!  I didn’t think it was possible to find a place like this in Bali all to ourselves! 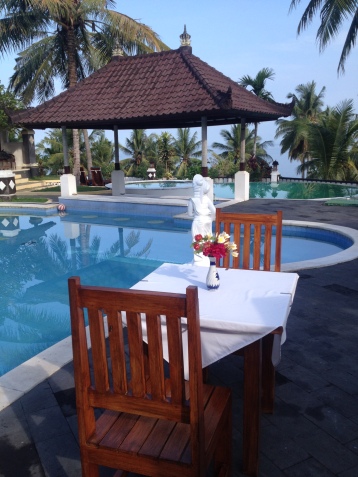 Our last stop on our epic scooter journey, was Medewi surf break.  We spent two nights staying at Sea Medewi Resort which is right on the surf beach:

We had surfing lessons for Rp. 200,000 each ($US14.60) for around 3 hours.  Even after that however, I still suck at surfing!  Didn’t matter though, there’s plenty of people surfing the Medewi Point break that don’t suck at it – and it’s awesome to watch.  So I found myself a spot on the beach to down a bintang or two and watch the pros at it! 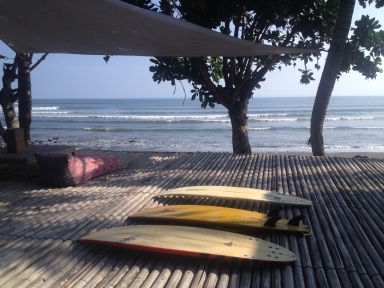 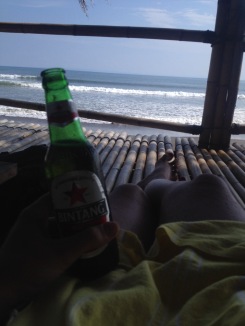 Most of the next day was spent dodging the chicken trucks and pot holes back to Ubud.  After over 230 kilometres, it was a sad day having to hand our scooters back when they had taken us so many amazing places and shown us so many things.  By far the easiest, cheapest and most fun way to see more of Bali than just the tourist hotspots.  The scooter allowed ultimate freedom, which is what quitting my job and backpacking around South East Asia was supposed to give me!

Travelled to any of these places?  I’d love to hear your thoughts!

One thought on “Bali, Indonesia – North and West”