After 5 weeks in Bali (including the Gili Islands and Lombok), it was time for us to explore more of Indonesia (damn you Bali for being so awesome that you took so much of our 2 month tourist visa!).  The obvious next step for us was to head to the island to the west, Java.  So many locals in Bali that we spoke to either were from Java or only had good things to say about it, so it made sense for us to head there.

We hired a driver to take us from Ubud to Gilimanuk, the ferry port to Ketapang, Java.  The drive was a good three hours, and that’s with crazy Indonesian driving too!  We did also stop on the way at Taman Ayun temple in Mengwi, just outside of Ubud (about 40 minutes).  The temple is surrounded by the irrigation waters that feed the nearby rice paddies, which makes it absolutely beautiful to see:

Now, in Gilimanuk, there’s nothing.  Especially for tourists.  I can’t imagine what it would be like doing our journey the other way around, and turning up there and that being the entry to your Bali holiday.  The ferry terminal is as budget as it gets, the ferry passenger manifests were hand-written on what looked like toilet paper and the docks were made of the oldest wood I’ve ever seen.  But, it works!

No one at the ferry terminal speaks english – which was not a problem, as it’s all pretty self explanatory.  The ferry ticket cost Rp. 6,000 each ($US0.43) for the half hour journey.  We somehow managed to time it perfectly, as we had to shuffle quite quickly (as quickly as you can in the rain, with your life strapped to your back and in flip flops!) and the ferry left immediately.  Apparently the ferries run every twenty minutes or so, so you’ll never be left high and dry (pardon the pun).

All ferries will primarily be car ferries – but they usually have a seating area upstairs where you can have a safer passage across the Bali Strait than we did.  Because we had boarded so late, there was no way we could squeeze us and our backpacks through the mass of cars and scooters parked on the entry level, and up the stairs to the passenger seating area.  Hence, the next half an hour was a game I have perfected due to many trips on the London tube.  Feet wide, sway with the vessel, grab something if you can.

When it came time to disembark, chaos:

You can hear me giggling in the video because of the ridiculousness of the situation!

Our tour was arranged through Blue Flame Tour and they planned out a bespoke tour for us – mainly because we seem to be doing this around the other way to most people that come to Java, south to north rather than the opposite.  The tour basically picked us up, took us to the tour of Mt Ijen, then to tour Mt Bromo, and finished by dropping us at the Surabaya train station.  They arranged all of the guides and drivers for us, but for a price.  This tour was Rp. 5,000,000 ($US366 for two people, including all hotels and meals for three days/two nights).  Both tours begin at night, Mt Ijen because the blue flame from the sulphur mines can only be seen at night, and Mt Bromo so that you can see the sunrise.

Our driver picked us up from the Ketapang ferry terminal, dropped us at the hotel they had arranged, and organised to pick us up for the Mt Ijen Blue Flame tour at 11:30pm.  Yes, you read that right, 11:30pm that same day.  Meaning, we pretty much had to go to bed as soon as we had checked in at 4pm!

Luckily, the curtains in our room were blackout, and we had already downloaded some soothing rain noises to help us sleep!  It’s funny how you can trick your brain to thinking it’s midnight when it’s only 4pm!

I still can’t remember that “morning” correctly, as it was still the same day I had gone to bed, but the hour drive to the parking lot at Mt Ijen went by in a flash.  We were given a gas mask for later and started the hike at 1am.  Hiking at 1am, normal right?

It was quite a solemn experience actually trekking through the jungle at night where all you can see is the milky way, and all you can hear is your own breath (mine was raspy after weeks of delicious Indonesian food and laying on the beach!).  Once we arrived at the crest, the rocky path down to the lake and blue flame, looked impassible.  Somehow, we were lead down by our guide, stopping periodically to let a miner who was coming up carrying 70-odd kgs of sulphur rock on their shoulders passed.  This is where I needed my gas mask, the plume of sulphur-laiden steam from the mine was thick and made it very hard to breathe. 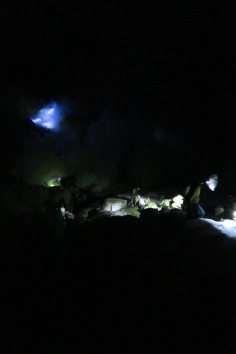 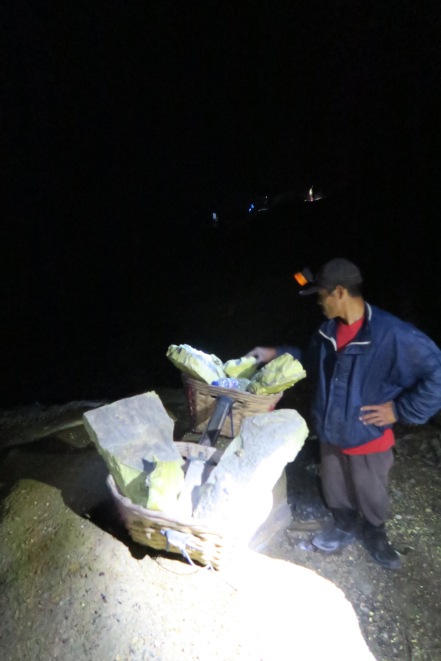 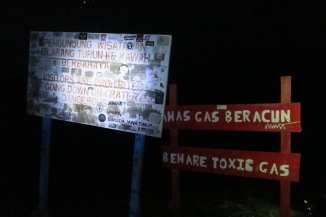 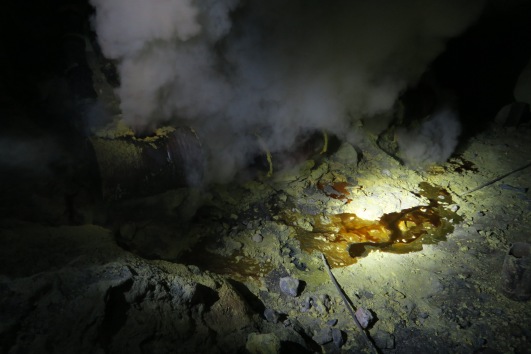 Once the crater started to fill up with other tourists, we decided to head to a sunrise point at the crater’s edge.  You can pretty much choose where you want to wait for the sunrise here, at the crater lake, crater edge, halfway, up to you.  Our guide was a lovely Indonesian fellow, who spent his entire time up on Ijen freezing his ass off!  We wanted to watch the sunrise from a spectacular spot on the crater edge, but he told us it was too cold – considering he was wearing long pants, two sweaters, a jacket and a beany; and we were in shorts and t-shirts, I didn’t take his thoughts on temperature for gospel, and we trekked there anyway, leaving him behind (what a guide, huh!?).  And I’m so glad we did:

From Ijen, we were driven the 6 hours to Mt Bromo by our driver organised by our tour company.  We have had over ten private drivers since arriving in Indonesia, and this one seemed very similar to the others – that was until he fell asleep at the wheel of the vehicle while we were climbing to the foothills of the Mt Bromo area.  Seriously.  I could see his face in the rearview mirror, and happened to glance in his direction after he was speeding and darting a little more than usual, and that’s when he fell asleep and swerved off the road directly toward a concrete barrier.  Luckily, we sprang to action and yelled quickly enough to wake him up and get him back on track.  We offered to stop for a break, or to drive for him, but he refused saying he was fine.  The next thirty minutes to our destination were horrible!

As soon as we arrived at the hotel, we rang our tour company about the situation.  After all, this was the driver that was supposed to take us on the Mt Bromo tour at 3am the next day and he couldn’t even stay awake at 1 in the afternoon!  It could have been a very awkward conversation, especially with the driver standing outside our room, but there was no way anyone should put up with this.  I don’t love conflict, but this was a matter we had to resolve.  Thankfully, Blue Flame Tour sent another driver to pick us in the morning for the Mt Bromo tour, and also reduced the price of the tour.  I know this was a great way for them to deal with the situation, but I’m still a little weary!

At 3am, our new driver knocked on our door ready to take us in a 4-wheel drive up to the Mt Bromo viewing area.  He looked well rested and alert – which was a good step up!!  The morning was extremely foggy, and I was packing myself pretty much the entire journey to the first sunrise viewpoint, as you could not see more than about 2 feet in front of the Jeep.  The point of the 4-wheel drive is because you drive across the ‘Sea of Sand’ The sunrise view point is actually on the hillside about 30 minutes away from Mt Bromo itself, on Mt Penanjakan, so that you can catch the sun breaking over Bromo, and the other formations in the Tengger massif (group of hills surrounding Bromo).

When we arrived at the sunrise view point, we were about the 200th Jeep.  Seriously.  We managed to find a little spot through the bush to watch the sunrise, rather than jostle with the hundreds of other people on the sunrise viewing platform.

From the viewpoint, we crossed the Sea of Sand again and parked at the bottom of Mt Bromo.  You can choose to ride a horse to the staircase where you can ascend to the crater edge, but we enjoyed the 15 minute walk. 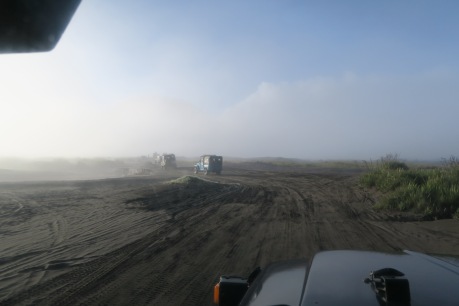 The staircase to the crater starts off great, but then becomes increasingly slippery as it is covered with sand and ash the closer you get to the top.  It’s not impossible, but being as crowded as it was it was a slow journey considering it’s less than 200 stairs. 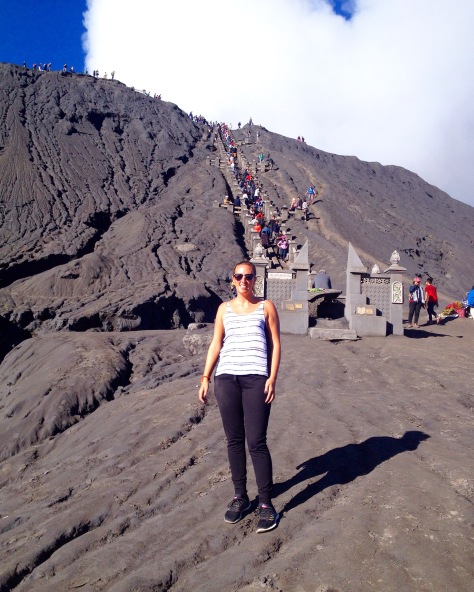 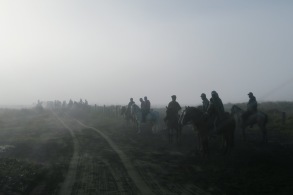 It was quite scary standing on the crater of an active volcano that erupted ash and smoke only 6 months ago causing a 1 kilometre seclusion zone!  The noise of the crater was insane, especially as the only thing separating you from slipping into it was a 2-foot concrete barrier that had been erected a quarter of the way along.

That was a big day because we then still had to travel the 5 hours to Surabaya to catch our train to Yogyakarta at 4:30pm!  I probably wouldn’t recommend squeezing both the Bromo and Ijen tours into 2 days like we did, as it was very rushed, and we were extremely tired for much of the days after the treks.  Otherwise, highly recommended to go and see these rarities if you can spare a few days.

Been to Java?  Or either Mt Bromo or Ijen?  I’d love to hear your thoughts on the area!